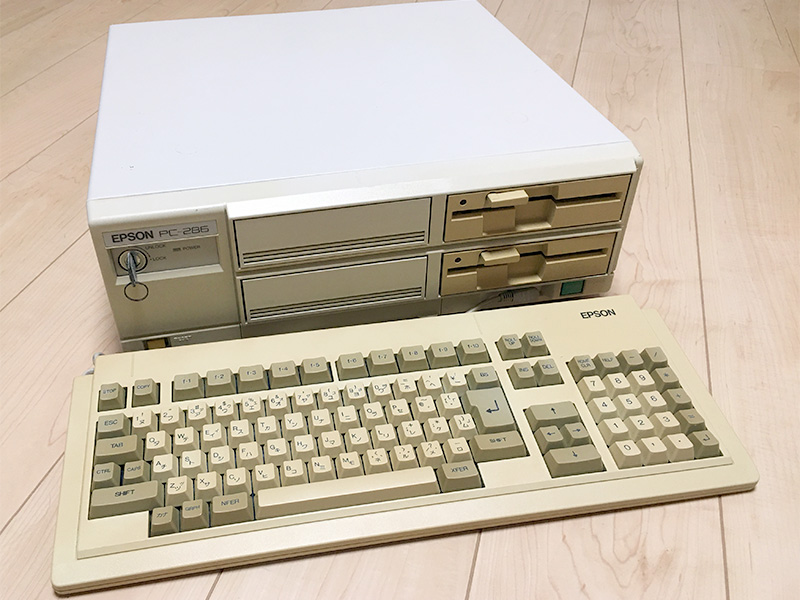 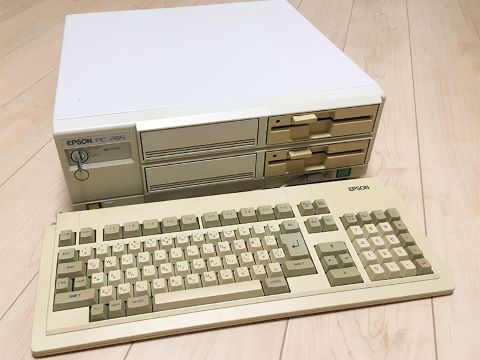 It had the same rectangular parallelepiped housing as the PC-98 series, and had two built-in 5-inch drives. The keyhole is visible on the left side, and if you insert the key and turn it when you leave your seat, you will not be able to accept key operations and resets.

This corner looks back on the nostalgic microcomputers and PCs that will remain in your memory with photos. This time, we will take up the PC-286MODEL 0, which was newly released by Epson as a PC-98 series compatible machine.

On the front of the main unit, there is a key slot on the left and four slots on the right. The two have a built-in 5-inch FDD, but the rest could hold a hard disk or streamer. There was a reset button on the lower left, a clock selector switch, a volume knob, a mouse interrupt selector jumper, a triple DIP switch, and a keyboard connector and a power switch on the right when the lid next to it was opened.

In the mid-1980s, many so-called IBM PC compatibles were released by various manufacturers in the United States, and one of them was Seiko Epson (hereinafter referred to as Epson). Epson, which has achieved some success with IBM PC compatibles, now thinks about making a compatible machine of the PC-98 series, which was establishing the position of the de facto standard in Japan, and starts to move.

At that time, the IBM PC had an open architecture, while the PC-98 series had a closed architecture, but Epson analyzed it and created an original BIOS. It put out an advertisement that implies the release of a PC-98 compatible machine.

Then, on March 2nd, Epson sent a “Notice of March 9th / 98 Compatible Machine Presentation” to the media companies, but it turned around and a notice of postponement was sent by phone in the evening of the 7th. The reason was “I decided to refrain from selling until we talked with NEC about the copyright issue”, but for some reason I suddenly announced a new product on the 13th.

The communication with the news media at this time was published in the May issue of the monthly magazine “Micon”, and Epson’s managing director Aizawa (at that time) said, “When I showed the finished product to NEC, it was said that the BIOS was a copyright infringement. Therefore, the BIOS is being replaced with a new one, “said NEC’s Managing Director Mizuno (at that time), who met a few hours later. It is not gray, including the above. ”

On the back of the main unit, the service outlet and power connector are located on the left, the mouse connector, 1MB FDD interface, RS-232C connector, printer port on the bottom, four expansion I / O slots on it, and the image on the right end. The output connectors were lined up.

At this point, the PC-286 MODEL 1/2/3/4 was on the lineup to be released, but on April 7, NEC infringed the company’s program copyright on those four models. We asked the Tokyo District Court to discontinue the production and sale of the PC-286 series.

After that, at the first trial held on the 14th, Epson’s report revealed that the similarity of the BIOS was about 1.6% when calculated from the number of bytes of the entire source code. Regarding this matter, on May 19, NEC stated that “the focus of the proceedings is not the percentage of the total, but the fact that it violated the specific routine situation that makes the BIOS.” rice field. After all, Epson decided to discontinue the production and sales of PC-286MODEL 1/2/3/4, announced the PC-286MODEL 0 taken up this time on April 24, 1987, and will release it nationwide from 30th. Will be.

On the bottom, there is a connector for FPU expansion, which can be accessed with two screws. However, if you open the lid, you can access not only the FPU but also the ROM, so it may have been made on the premise that you should replace the ROM if you are sued.

The keyboard is made one size smaller than the one for the PC-9801 series. There is no vf key above the numeric keypad. The CAPS key and Kana key are toggle type that dent when pressed.

The feature of PC-286MODEL 0 is that it appeared as a compatible machine of PC-9801VM / VX series, but it is also noteworthy that the CPU is equipped with 80286 10MHz (no wait). The CPU used by the PC-9801VX2 was an 80286 8MHz, so it was possible to run it faster than that. The CPU clock can be switched in 3 steps of 10/8 / 6MHz with a single switch even while the main unit is operating, and at that time, the LED of the power lamp also changes from green → orange → red, so that you can see it. increase.

The V30 that was on the PC-9801VX is not installed on the PC-286MODEL 0, but the article at that time also stated that “there is no problem even if it is not there”, and this was not a cause for concern. It is a pattern.

Initially, only MODEL 1/2/3/4, which is scheduled to be released, was posted, but in the next month, MODEL 0 will be placed in a small box as shown here, and eventually it will be an advertisement only for MODEL 0. I did.

The memory had a built-in 640KB, but the EGC (enhanced graphic charger) of the graphic function that VX had was not installed. However, it was written that this was not a problem either, as the majority of the software did not try EGC for compatibility.

BASIC does not work because BASIC was an option, but the MS-DOS version of the software has been confirmed to work with 150 titles at the time of the release of PC-286MODEL 0. Among them, popular software “Ichitaro” and “Lotus1-2-3”, and games such as “Xanadu”, “Märchen Veil II”, “Wizardry”, and “Wyvern” were said to move. Regarding BASIC, if you use N88-Japanese BASIC (86) (MS-DOS version), it was possible to program with BASIC, although commercial software using BASIC does not work, but so far. If you ask me to operate it …

Starting with the PC-286 MODEL 0 featured this time, the hot battle between NEC and Epson will be cut off. After this, Epson will make further offensives, but I will give up the introduction of those models on another occasion.

In the July 1987 issue of the monthly “Microcomputer”, a ROM comparison diagram of PC-9801VX and PC-286MODEL 0 was published.