“Double if you buy in the US” Foreigners The popularity of gold, branded goods, real estate, etc. has skyrocketed due to the expansion of inbound demand! People who find a “winning opportunity” in the “depreciation of the yen” (TBS NEWS DIG Powered by JNN) 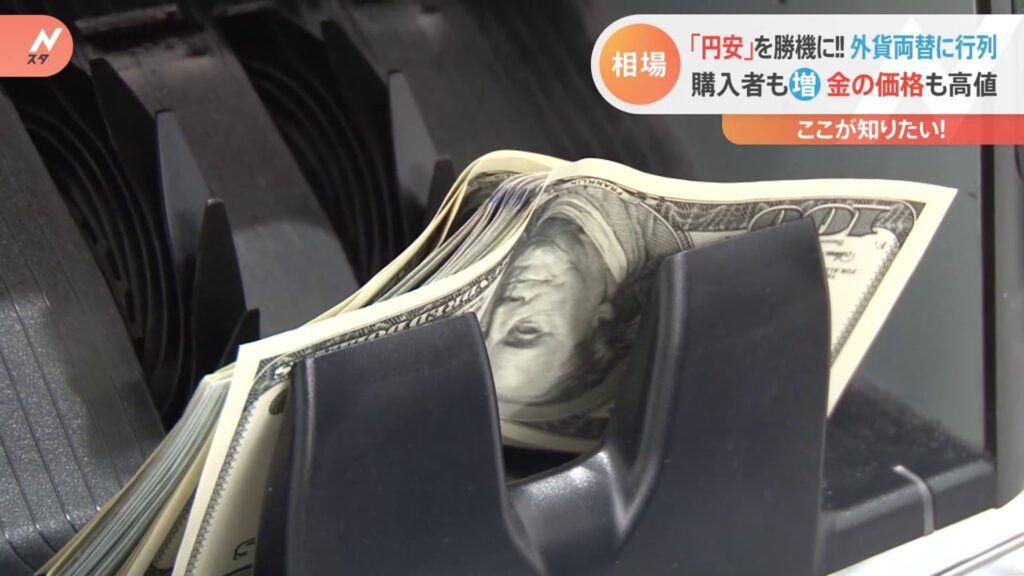 ■ Taking advantage of the “depreciation of the yen”!

“Interbank” in Shinjuku, Tokyo. More than 100 people exchanged foreign currency into “yen” every day. On the 21st, the purchase rate of this store is 133 yen to the dollar. Interbank clerk: It’s a cash exchange of US $ 2500. 2,500 dollars ➡ About 330,000 yen (June 21st) ➡ 275,000 yen (at 110 yen per dollar) The difference will be more than 50,000 yen. This woman was sleeping at home, exchanging dollars and yuan for Japanese yen. A woman who exchanged dollars and yuan: It was 461,000 yen. I haven’t seen the depreciation of the yen so far while I lived in Japan for 20 years, so I thought this was an opportunity. Interbank Go Sato Representative Director: At most, the purchase amount of foreign currency alone may exceed 100 million yen.

■ The price of gold is also high. The number of purchasers is increasing.

It is “gold” that is soaring with the depreciation of the yen. GINZA TANAKA Ginza Main Store Daisuke Yamaguchi Deputy Manager: 1 yen, the gold price rises by about 65 yen each time the yen depreciates. For the past few days, the gold price has been around 8800 yen per gram. It goes without saying that many people are selling gold in response to this soaring price, but it is said that more and more people are buying it. Deputy Manager Yamaguchi: If the yen depreciates, the gold price will rise, so more and more people are buying gold, thinking that the yen will depreciate further. Last week, the United States decided to raise interest rates for the first time in 27 years to curb inflation. This unusual “significant rate hike” is also accelerating the depreciation of the yen.

■ The number of foreign buyers has tripled, and real estate brokerage is booming due to the depreciation of the yen.

Meanwhile, in Akihabara, Tokyo, there are shoppers from overseas. With the record depreciation of the yen, the movement of foreigners to shop in Japan is accelerating, saying “now is the time to buy”. N-st: What did you buy? Uzbekistan: iPhone. I bought it for 40,000 yen, but it’s used. It’s a little profitable if you buy it here (Japan). American: I bought a figure. There are only imported products in the US and it’s very expensive. The price will double. So this price is really cheap. This move is also in real estate. Japan Agent Room Story Masahiro Kusanagi General Manager: The depreciation of the yen has increased foreign investors’ willingness to buy real estate in Japan. This real estate agency, which targets foreigners as its main target, has seen a three-fold increase in the number of foreigners purchasing Japanese properties compared to 2021. Many people buy it for investment purposes, and it is said that properties in central Tokyo such as Shinagawa and Shinjuku are popular. For example, we sell a 2LDK property in a tower apartment in Shinagawa with a panoramic view of the city center for 97.8 million yen. We are currently receiving 4 inquiries, and we expect to have buyers by the end of June. Kusanagi General Manager: If we talk on the premise that the yen will continue to depreciate, I think that investment motivation will continue to grow. I’m looking forward to it.