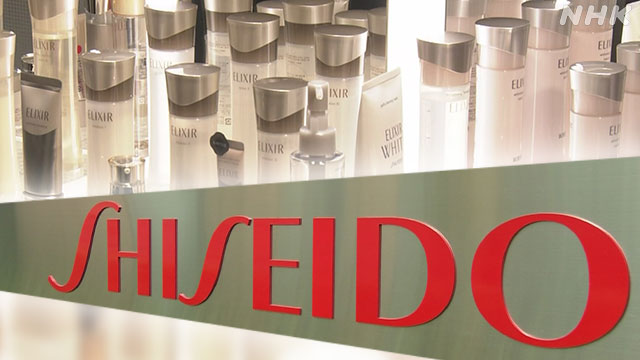 It has been 150 years since the company was founded. Shiseido is a major cosmetics manufacturer with sales of 1 trillion yen.
This giant ship is led by Masahiko Uotani, who became president eight years ago. Since his inauguration, he has increased sales with a strategy to increase brand value, but the business environment has changed drastically due to the Korona-ka. Under this adversity, we are launching a reversal offensive by boldly narrowing down the business and digging deep.
What is the “return to origin” strategy for the next 150 years?
(Satomi Mogi, Reporter, Ministry of Economic Affairs)

Items that cost more than 10,000 yen each are lined up.
The aim is to focus on capturing the ever-changing needs of beautifying the skin itself, which will lead to a recovery in domestic business performance.

The kettle for making lotion is digitized, and the thickness and stickiness that have been relied on by the experience and intuition of skilled staff are automatically adjusted.
The robot is responsible for closing the lid of the container and packing it in a box.

President Masahiko Uotani
“Fukuoka is the contact point for Asia. Since we are working on overseas business from Japan company-wide, this is especially important from the perspective of a base for shipping to Asia.”

That’s what President Uotani showed up at the completion ceremony.

“From Japan” is the way to growth

Shiseido is accelerating the development of production bases in Japan.
This is the third domestic factory to be completed in the last three years.

Why are companies aiming to expand their overseas business strengthening their productivity in Japan?

There was the basis of the growth strategy that President Uotani has been advocating since taking office.

In 2014, Mr. Uotani, who served as the president and chairman of Coca-Cola Japan, became the president of Shiseido.
In fiscal 2012, we fell into a final deficit of 14.6 billion yen and were entrusted with the restructuring of a long-established company from an outside perspective.

Mr. Uotani, who is familiar with marketing, set the pillar as a pillar of improving the domestic brand power by strengthening the production system to capture the demand for “Made in Japan” products.

President Uotani
“It is said to be” Japan in manufacturing, “but in order to increase brand value, products cannot reach customers without supply chains, factories, and logistics that can realize safe, secure, and high-quality R & D capabilities. We have reviewed all of these things. We are committed to creating an environment where workers can work in a fulfilling manner by utilizing the most advanced technology in the world. “

Crisis once in 100 years

The new Corona has changed the environment as we have been steadily advancing reforms, such as achieving the plan ahead of schedule.

The target inbound demand has disappeared, and sales in the domestic market have plummeted due to refraining from going out.
In 2020, we posted a final deficit of over 10 billion yen for the first time since taking office as president.

President Uotani
“The once-in-a-century crisis has come. This can’t be peaceful, and it could lead to a major financial crisis. When thinking about where to survive, the word” selection and concentration. ” Above all, I seriously thought about what I really wanted to do. “

Return to origin, and to the skin

And what I arrived at was “sticking to the skin.”

The founding business was a dispensing pharmacy, but by the 30th year of the Meiji era, it had already started selling cosmetics.
At that time, when Japanese women didn’t have a habit of applying lotion, it was a high-class product that women longed for.

Since then, we will focus on developing skin care products and grow as a cosmetics manufacturer.

President Uotani, who has pursued the strengths of the company as a management professional, decides that this starting point is the trump card to win in the world.

President Uotani
“In the history of 150 years, what is the main thing is that we are one of the top cosmetics companies in the world with know-how and knowledge centered on skin research and skin care. The cosmetics business. It is a step for Shiseido to survive and grow when it becomes after-corona. “

President Uotani has set a new goal of “the world’s best in the skin beauty field in 2030”.

All of the above-mentioned three state-of-the-art domestic factories produce skin care products in the mid-price range and above.

In addition, we have largely delegated authority to management.
We have CEOs in each of the six regions of the world, including Europe, the United States and China, and are trying to develop strategies that specialize in skin care products around the world.

Shiseido is ranked 5th in the beauty-related sales rankings of companies around the world by a major American fashion industry newspaper.
There is a difference of several times compared to the top “L’Oreal” and the second place “Unilever”, and the challenge was how to increase its presence among the famous global companies.

The answer is, so to speak, “to master skin care.”

Concentrate investment on the skin and sell the business

On the other hand, we also made a bold review of our business.

At that time, we sold the daily necessities business such as shampoo and face wash, which were known to a wide range of people, to an investment fund.
We have terminated the global license agreement with “Dolce & Gappana”.

It was a big decision to separate the business that costs a lot of advertising expenses and concentrate management resources on the main “skin”.

The key is “human resources”

“The power of employees” is what President Uotani sees as the key to a successful return to origin.

To that end, I went around the site myself and interacted with employees.
It is said that he has had dialogues with a total of 80,000 employees, including those overseas, since he took office as president.

We are trying to capture the signs of changes in consumer needs that can only be seen in the field and to lay the groundwork for the next growth.

President Uotani
“While eating together for lunch, say one of the bad old guy gag, then you’ll laugh, laughing will make you feel relaxed. And what everyone is saying Ask if you’re crushing or worried.
The next 150 years later, I think it is my mission as CEO to lay the foundation for a company that originates in Japan and has a strong presence in the global market. “

Shiseido will take the plunge into the skin care business and aim for sales of 2 trillion yen in 2030.
How will long-established companies representing Japan fight in the world and expand their business?

The true value of the “PEOPLE FIRST” philosophy, which President Uotani advocates as a Japanese company, is likely to be questioned.