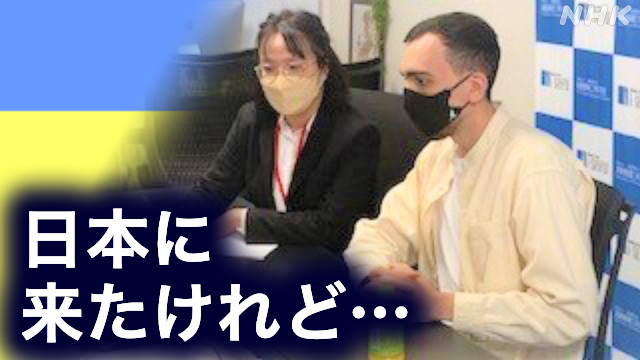 “There is no more support. The rest is my problem …”

Five months after Russia’s invasion of Ukraine. The number of evacuees who entered Japan exceeded 1,500. Some voices thank you for your generous support.

However, some people live with frustration. A man who evacuated in April told me a story.

table of contents
・ What is the experience of an evacuated man?
・ Introduction of Japanese teaching materials for refugees
・ Learning support for children
・ A list of local government consultation counters

There is also evacuation support

“It was a small town with a coast, cafes and restaurants, good food and beautiful scenery. Missiles started to fall every day in such a peaceful town.”

Anton Mikalkov (29), who is evacuating to Osaka, told me that.

Anton is from Mykolaiv, about 100 kilometers east of Odessa, the largest port city in southern Ukraine, and although it wasn’t usually in a conflict with Russia, things got worse after the Russian invasion.

On March 29, the Mykolaiv State Capitol was attacked by rockets, killing 14 people (as of the end of March).

Anton, who has a chronic illness, was allowed to evacuate abroad and fled to Japan with her mother in April because her sister had lived in Japan for over 15 years.

In Japan, which has been evacuated, a group of Japanese language schools accepted me, and everything went smoothly from finding a house to preparing basic daily necessities.

However, it was the wall of words that stood in the way.

Anton has no experience learning Japanese and cannot read, write or speak.

While taking classes at a Japanese language school on a daily basis, I am gradually learning daily conversations such as greetings and shopping, but it is said that Japanese is still difficult. He answered the interview in English.

Anton
Japanese is difficult because it is not similar to English-speaking languages. Since the way of writing sentences is completely different from Ukrainian, you have to assemble the sentences in your head before speaking. Besides, there are many Chinese characters in Japanese, so it is difficult to write.

The neck is still …

It’s been 3 months since I started living in Japan. What was even more deadlocked was “finding a job.”

Originally in Ukraine, Anton learned digital marketing skills and started an advertising agency as a venture.

I usually communicate in English and undertake requests from companies in Europe.

Even in Japan, I repeated interviews with IT-related companies to make use of that skill.

“can you speak Japanese?“

What was required at the interview was Japanese ability.

I gave up the skills I had cultivated and once considered recruiting an English conversation teacher, but I had to decline because I had to work in Tokyo, which is far from my sister’s Osaka.

Anton
You may find a job if you study Japanese, but it will take some years. You have the option of moving to Europe far away, but that depends on the future situation …

The support side is also frustrated

Anton’s evacuation life is supported by the “Ukrainian Student Support Association,” which is formed by a group of Japanese language schools that mainly accept international students.

The association has accepted 32 young people nationwide so far, and is aiming to accept 100 young people by the end of this year, but it is said that acceptance is a little behind schedule due to the effects of soaring airline tickets. ..

It is said that the Japanese language school actively supports people looking for a job so that people who evacuate later can easily continue.

“Seifu Institute of Information Technology” Hiroshi Fukuhara Vice-Principal
After all, when it comes to acquiring a level of Japanese that can be used at work2-3 yearsNeeds time. I also go to work interviews together, but the current situation is that it is difficult for companies to meet their needs if they don’t understand Japanese …

On top of that, he talked about how to support evacuees as follows.

Overall, there is plenty of support, but the level of support tends to vary depending on where you live. Also, in the unstable war situation, students seem to flash back their hard experiences in the field by watching the news when they are alone, so it is necessary to consider mental care in the long run.

The first language barrier you face in your life in Japan.

To support Japanese language education for foreigners, the Agency for Cultural Affairs added Ukrainian and Russian to the website “Connecting Hirogaru Nihongo no Seikatsu” on June 30th, where you can learn Japanese for free. did.

This is because there were many requests from local governments that accepted evacuees.

In addition, the Agency for Cultural Affairs plays the role of coordinator when a person who has evacuated from Ukraine asks “I want to learn Japanese”.

A Japanese language class held by the local government according to the needs of the counselor and the goal of “what level to aim for” such as “I want to learn face-to-face”, “I want to study every day”, “I want to study on Saturdays and Sundays because I work on weekdays” We will guide you and recommend online courses in areas where there are no classrooms.

A person in charge of the Agency for Cultural Affairs said, “Since the evacuees have come to Japan from the beginning, the foundation of their lives has been improved, and the number of inquiries about” how to learn Japanese “is increasing. I want to make a suggestion. “

There are also moves to support children who have been deprived of educational opportunities in their homeland.

There is a group that has begun to make videos explaining calculation methods, formulas, etc. in Ukrainian so that children can learn subjects such as math and mathematics without stumbling on the language barrier.

At the “Kyoto University of Education Thinking about Education for Foreign Children”, in order to support the learning of children whose mother tongue is not Japanese, “math” and “mathematics” in five languages ​​such as Portuguese and Japanese I have made a learning video of.

After the military invasion by Russia, we raised funds for the production so that children who had evacuated from Ukraine could learn in their mother tongue, and started to release the Ukrainian version of the video little by little from April.

The translation into Ukrainian is done with the help of international students and Ukrainians who still live in Ukraine.

Remittances also provide financial support to those in difficult situations.

Professor Yasushi Kuroda, Kyoto University of Education
If you can’t speak Japanese, you will naturally be delayed in learning. In order to avoid this, we must provide teaching materials that allow students to study in their native language. It’s hard to get to math and mathematics by learning a new language.

According to Professor Kuroda, for example, Japanese textbooks use brush calculation for addition and subtraction, but Ukrainian textbooks have a calculation style that keeps writing sideways.

In the video, you can also learn how to do long division in Ukrainian.

Professor Kuroda
Even from the teachers of the school using the video, the third grade children from Ukraine could not understand math in the regular class, but using this video, they raise their hands a little in the class. I’ve heard that you can now do things.

Children will shape the future when we think about 10 to 20 years from now, so I think that the country will not rebuild unless we firmly guarantee the academic ability of those children. In that sense, I would like to firmly support you so that learning will not stop.

This time, I hurriedly launched the production of the Ukrainian version and managed to get on track. Therefore, I think there is a possibility that we will be able to provide learning support for children in Myanmar and Afghanistan in a short period of time. I think that the future of children will be determined by education. We really want to think about it as the next stage.

There are windows in each area to support the acceptance of evacuees and troubles.

I think that there are people who are worried about new evacuation plans, and people who have unexpected troubles in an environment with a different culture and language. If you notice it, I hope that people around you will call out to you.

“Tochigi Foreigner Counseling Support Center”
Phone: 028-627-3399
Hours: Tuesday to Saturday 9am to 4pm
* Ukrainian and Russian are supported by a translator

Looking for a Trustworthy partner in Japan

I look forward to be able to do Import Export with Japan.