Outside director “elderly & long-term incumbent” ranking[Top 100]The oldest 99 years old, including the big names from Sharp and Nippon Steel | 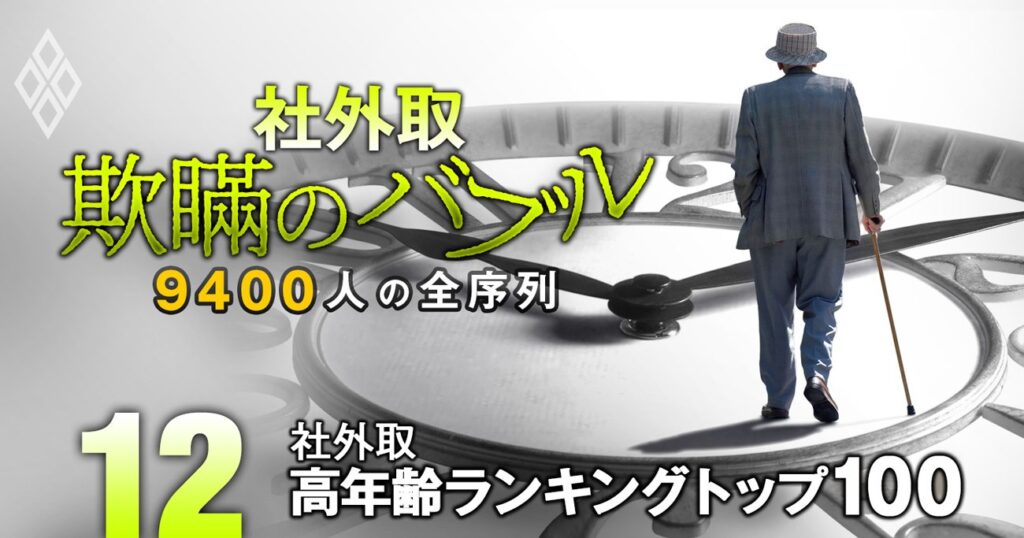 The aging of the company is the same for outside directors.Special feature scheduled to be released for about 3 weeks“External take-out” deception bubble “all ranks of 9400 people”In # 12, we will introduce 100 elderly outsiders along with the length of their tenure. There are nine outsiders over 90 years old, and the oldest is 99 years old. Big business owners of prestigious companies such as Sharp and Nippon Steel (currently Nippon Steel) ranked high. (Rihiro Shimizu, Editor-in-Chief, Diamond Editorial Department)

Externally traded by listed companies “Average age is 63.2 years old”
As many as 9 “super-aged” outsiders over 90 years old

According to a survey by the Diamond Editorial Department, the average age of the outside directors of listed companies, “9434 people,” is as high as 63.2 years. According to demographics, the “working age population” is 15 to 64 years old. If you are an ordinary person, you are about to retire. Furthermore, counting the number of people aged 65 and over, it reached 5802, accounting for more than 60% of the total number of outsiders.

The aging of outsiders is similar to the trend in Japan as a whole. By the way, the number of outsiders in their 80s was 293. In addition, there were nine people in their 90s who were still active as outsiders. The oldest is 99 years old.

In this article, I also examined the length of my tenure, but it is not uncommon for me to work outside the company for more than 20 years, and the longest was over 40 years.

Of course, there is no such thing as “because I am old, I am absolutely useless because it is a long time.” However, there are numerous cases in which elderly executives who have been in office for a long time are “gerontocracy” when interviewing companies. The theme of this special feature, “Isn’t it a decoration by socializing personnel?”

What kind of company do these super-aged outsiders secure posts, how many years have they worked, and how much have they been paid?

Special feature “External take “Bubble of deception” All ranks of 9400 people]Multiple evaluations of 9434 Japanese outsidersUnique rankingIs prepared. In this ranking, we will introduce 100 elderly outsiders along with the length of their tenure. Major managers of prestigious companies such as Sharp and Nippon Steel (currently Nippon Steel) also entered the top ranks.

Then, on the next page, let’s check the length of the term of office in addition to the company name and the real name of the outside company. The ranking also includes the total estimated compensation amount. A big business owner in his late 80s receives nearly 40 million yen a year by concurrently serving as an outsider at multiple companies. The remuneration for elderly outsiders can easily exceed 10 million yen. Do the people appearing here meet the expectations of “the leading role in governance reform” sent to outsiders?

This article isOnly for paid members.
You can view it by registering as a paid member.

By registering for Diamond Premium (paid member), you will be able to read in-depth business articles and special features that support busy business people to acquire information and improve their skills.