What is the future of advertising platforms in the age of privacy: Yahoo! JAPAN MARKETING CONFERENCE Report

Privacy is beginning to make a big difference in the digital media ecosystem. Under such circumstances, where is Yahoo, one of Japan’s leading advertising platformers, aiming for?

Online event for digital marketers held on June 10 “Yahoo! JAPAN MARKETING CONFERENCE 2022“. Mr. Masanaga Konishi of Yahoo took the stage in the session “Privacy and the future that Yahoo thinks”. He talked about Yahoo’s vision of privacy and advertising, unraveling the link between privacy and the digital media ecosystem.

“It is said that the first advertisement was posted on the Internet in 1994 by AT & T’s banner advertisement. About 30 years after that, digital advertisement has greatly evolved,” Konishi cuts out at the beginning of the session. .. “Looking back over the last 30 years, we can see that there has been a major trend shift about every 10 years.”

Mr. Konishi, who is currently the General Manager of Product Strategy Department of Media Platform Management Headquarters and Advertising Production Headquarters at Yahoo, joined Yahoo in 2005. He has consistently worked in the field of digital marketing. He has been responsible for programmatic advertising since 2013 and is now a leader in product strategy planning and promotion for Yahoo’s display advertising. 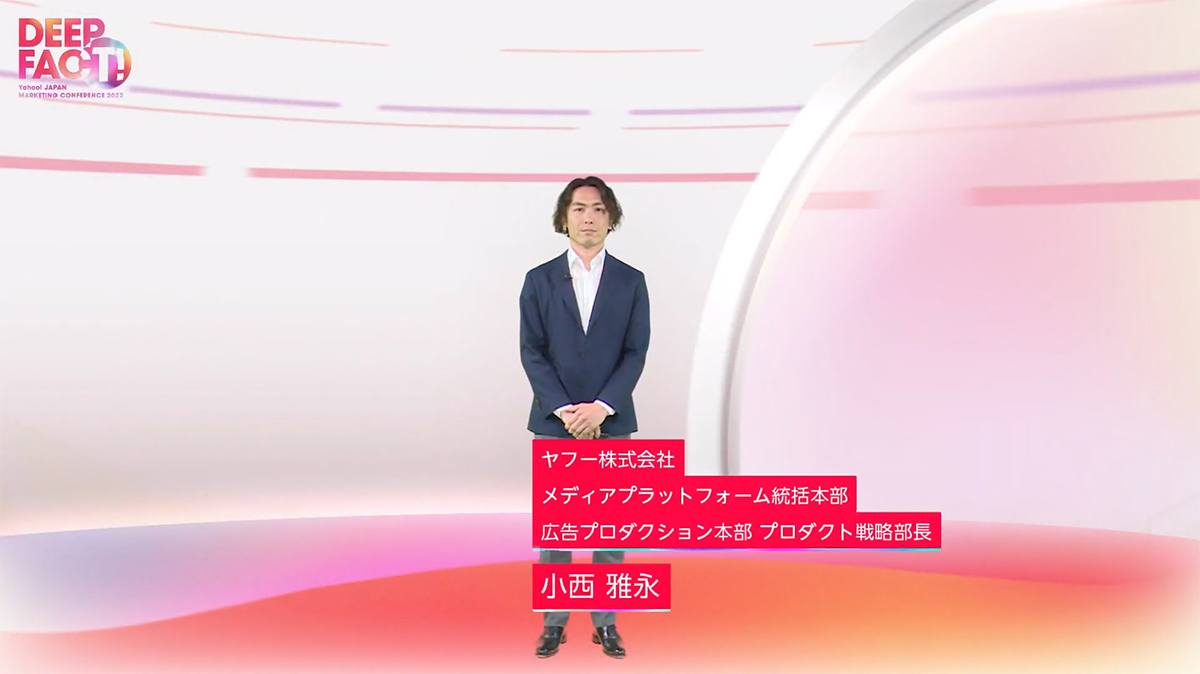 Mr. Masanaga Konishi, Yahoo at the time of the event

30 Years of History in Digital Advertising

“The first decade (from 1994) is the age of the media,” continues Konishi. During this period, the monetization of digital media progressed, and huge media such as Yahoo were launched. The next decade is the age of the audience. Around this time, media networking progressed, and marketing evolved significantly under the big theme of “from frame to person.” And from 2016 to the present is the era of privacy.

“Marketing has evolved to a high degree of people-centricity in the age of the audience. At the same time, the protection of user privacy has been called for, and it is irreversibly progressing as a global trend.” ..

An easy-to-understand example is the EU’s General Data Protection Regulation (GDPR) and Japan’s revised Personal Information Protection Law. In addition, Apple’s ITP (Intelligent Tracking Prevention) and ATT (App Tracking Transparency), which are already being introduced. And this privacy protection regulation is expected to become even stricter, such as Chrome’s third-party cookie abolition scheduled after 2023 and Android’s advertising ID regulation.

In this era of privacy, “user tracking” between sites and apps is basically impossible. Mr. Konishi explained that the effects would bring about the following two things.

Of course, this privacy protection is a top priority issue, Konishi stabs. However, if we pursue only that, it will be difficult to continue to meet the fundamental needs of users, such as “I want to enjoy useful content for free.”

“Therefore, while assuming this privacy protection, returning higher advertising effectiveness to advertisers will maintain and develop the digital media ecosystem supported by this advertisement, and advertisers and advertising agencies. We believe it will benefit all stakeholders, not just the store, but the media and even the users. “

Yahoo was founded in 1996. The current CEO is Takao Ozawa, the fourth generation. Mr. Konishi, who has been in the company for 18 years, has worked for all four generations of CEOs. Each manager has his or her own personality, and although their strategies and cultures differ greatly, they all share the same “user-first spirit.”

“This user-first is our DNA. We believe that it is the driving force for the overwhelming support of our users. In terms of privacy protection, this user-first stance remains unchanged.”

In May, Yahoo’s parent company Z Holdings announced its basic data protection policy. In it, it declares “realization of user privacy first”. According to the basic policy, Yahoo is also implementing various initiatives. The current efforts are mainly the following three. 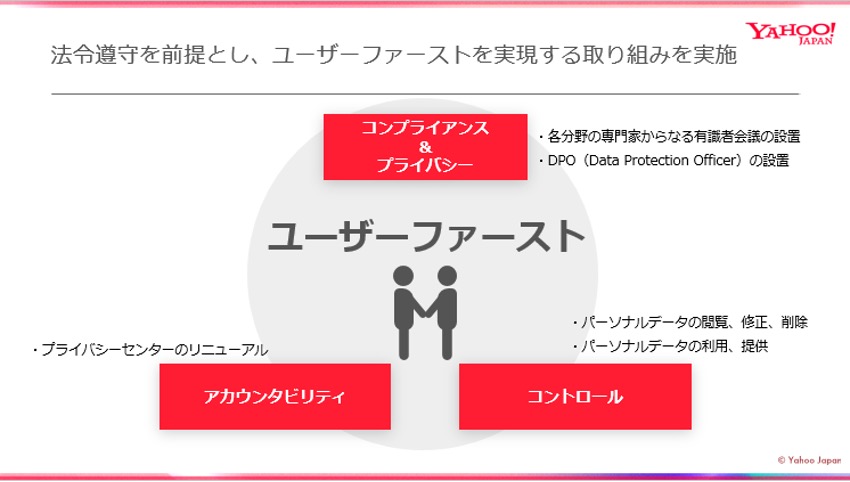 For a future-oriented advertising platform

Based on these, Yahoo’s display advertising, which Mr. Konishi is in charge of, will be updated to an advertising platform that is premised on the protection of user privacy. In particular, the back side of privacy laws and regulations is extremely complicated and fast, with laws and guidelines that differ by country and region, specification changes for each OS and browser, and new advertising-related technologies that are proposed daily.

“Yahoo is trying to solve these complex problems on the advertising platform side as much as possible. Advertisers and advertising agencies can continue to focus on their marketing activities. We are developing it. “

In this way, Yahoo has begun to evolve into an advertising platform that presupposes privacy protection, but Mr. Konishi says that he emphasizes two points in it. That is “understanding the right goal” and “delivering ads to the right users.”

To “understand the correct goal,” Yahoo has caught up with new measurement methods proposed by platformers, such as Apple’s SKAd Network and Google’s initiative-led Privacy Sandbox Attribution Reporting API. It is said that it directly contributes to the improvement of those specifications. In addition, we plan to release several unique measurement methods later this year. The first is the use of user consent information. The company plans to release two functions, detailed matching and conversion API.

“With these functions, the advertiser will be able to measure conversions correctly by encrypting and sending information such as the email address with the user’s consent and collating it with our database,” Konishi said. He says. “We are considering the use of estimation technology for areas where only definite information is insufficient.”

With regard to “advertising to the right users,” retargeting is becoming increasingly difficult, and by utilizing Yahoo’s overwhelming user contact points and vast amounts of data to expand users in a similar manner, it is more efficient than ever. Campaign can be realized. Currently, these features such as targeting, similar extensions, and automatic bidding exist as independent features, but we plan to integrate these features seamlessly in the future. 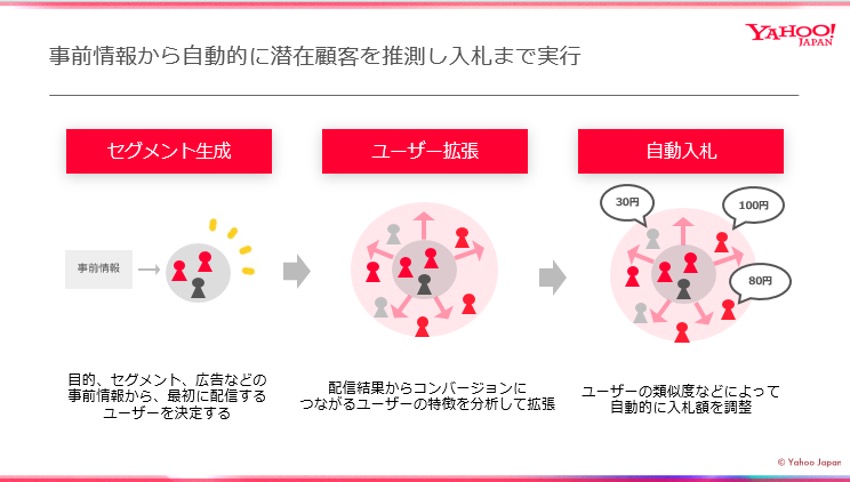 Seamlessly integrate each independent function (* Click the image to enlarge)

“Based on advance information such as the purpose of the campaign, targeting segment, advertising assets, etc., the user to be delivered first is decided and the advertisement is delivered. The characteristics of the user who leads to conversion from the delivery result are described from the huge amount of Yahoo data. We will be able to perform all of these steps automatically, which automatically adjust the bid amount according to analysis, expansion, and similarity. “

Privacy is beginning to change the digital media ecosystem. This problem has affected not only advertisers, but also digital media, which was made up of advertising revenue, and its users.

“In the spirit of user first, we will evolve into a new advertising platformer while giving top priority to privacy protection,” concludes Mr. Konishi. “We want to create a world where all stakeholders are pleased by deepening the understanding of the correct goals of advertisers and users more than ever, and connecting them appropriately using the means of advertising.”